35th LaMer Special Seminar “Comparative genomics: new insights into evolutionary adaptation in response to environmental change” is going to be held on Dec 9, 2019

35th LaMer Special Seminar “Comparative genomics: new insights into evolutionary adaptation in response to environmental change” is going to be held on December 9, 2019.

■Abstract: Evolutionary adaptation is the process that living organisms become adjusted to a new environment and it often entails acquisition and/or modification of their genotypic and/or phenotypic traits in response to a variety of biotic and/or abiotic factors in new environments. Due to innovation and rapid advances in DNA sequencing technologies and bioinformatics tools, decoding whole genome sequencing can be possible at a reasonable cost and timeframe. This makes it possible to understand the evolution of complex animal life at the level of genomic architecture. In the first part of my talk, I will focus on one of the comparative population genomic studies that uncover contrasting demographic changes of two closely related dolphin species in the last glacial. Population genomic data can be used to infer historical effective population sizes (Ne), which help study the impact of past climate changes on biodiversity. Comparative population genomic analysis of these two closely related species with some different habitat preference exhibit contrasting demographic changes in the last glacial, likely through actual changes in population size and/or alterations in the level of gene flow among populations. In the second part, I will present some of other comparative genomic project addressing some genomic signatures of deep sea mussel species that are associated with their successful adaptation to unfavorable, toxic environment. 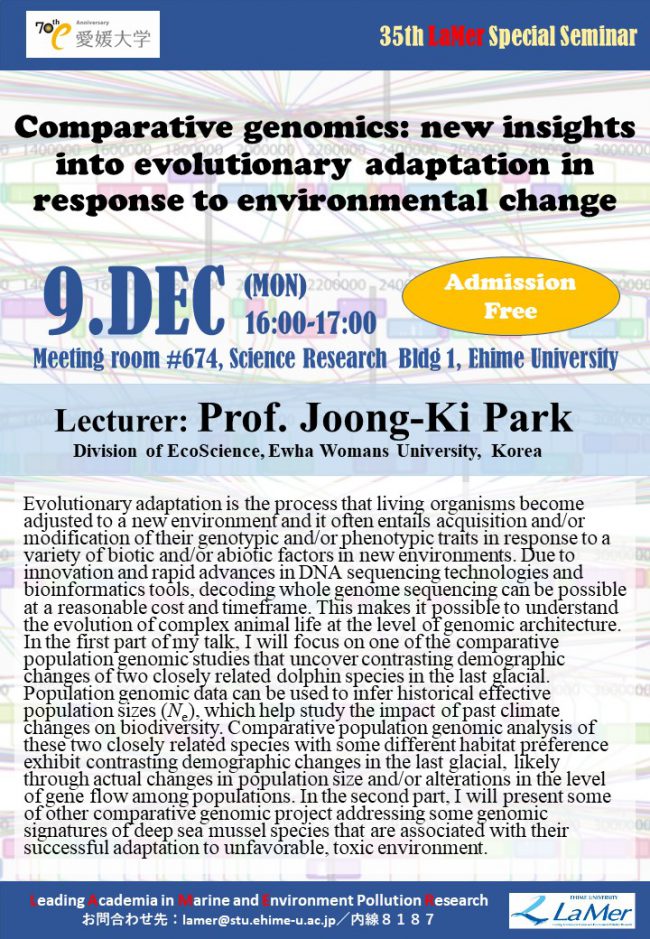