■Lecturer: Prof. Maricar S. Prudente
De La Salle University, Philippines
■Title: Environmental Studies on Climate Change Education and Ubiquitous Distribution of Persistent
Toxic Substances: Perspectives from the Philippines
■Abstract: For the last three years, we were involved on two environment-related collaborative studies namely: (1) effective climate change education through school-wide initiatives, digital literacy, and ethics education ; and (2) detection of artificial sweeteners and X-ray contrast media in aquatic environmental and wastewater treatment plant samples from Vietnam, the Philippines, and Myanmar. The first project is a collaborative educational action research project that brings together middle-school students from the United States and the Philippines to gather and share the results of research on how climate change affects their local communities, and to model ways in which schools can respond to these environmental challenges by empowering students to take an active role in implementing change in their own classrooms and communities. While for the second project, wastewater samples from the Philippines  were analyzed for artificial sweeteners (ASs) and iodinated X-ray contrast media (ICMs). High acesulfame, cyclamate, saccharin, and sucralose concentrations were found in surface water from Manila, the Philippines. The sucralose concentrations were one order of magnitude higher in the Manila samples than in the Vietnamese samples, indicating that more sucralose is used in The Philippines than in Vietnam. Acesulfame and cyclamate were found in surface water from Pathein (rural) and Yangon (urban) in Myanmar, but no ICMs were found in the samples. The ASs concentrations were two-three orders of magnitude lower in the samples from Myanmar than in the samples from Vietnam and the Philippines, suggesting that different amounts of ASs are used in these countries. This second study is the first report of persistent ASs and ICMs having ubiquitous distributions in economically emerging South Asian countries.

■Lecturer: Ms. Karina L. Damo
Mariano Marcos State University, Philippines
■Title: Phytochemical, Toxicologic Profiling and Anti-inflammatory Activity of Indigenous Medicinal
Plants
■Abstract: As a staff of the Tuklas Lunas Development Center for Luzon, Philippines, I was involved on a 5-year research project on modulatory role of indigenous medicinal plants identified in Ilocos Norte, Philippines in acute and chronic inflammatory diseases.  Part of the project involves a study on phytochemical, toxicologic profiling and anti-inflammatory activity of the identified indigenous medicinal plants. The presence of secondary metabolites was investigated.  In-vitro toxicity testing was done using MTT assay.  The anti-inflammatory testing was done using carrageenan-induced paw edema assay.  To test the safety of the 46 plant species, heavy metal content and pesticide residues were investigated.  Safety analyses include the use of pesticide kit developed by UPLB to test for the presence of carbamates and organophosphates.  Colorimetric method was used to determine the presence of lead, mercury and silver. Collection sites were recorded for possible source of contaminants.  Results showed that the 46 indigenous food plants were negative in heavy metals and pesticide residues indicating that the collection sites were not contaminated by toxic substance and thus can be viable sources of plants.  However, seven out of 46 plant species showed a significant increase in absorbance when reacted with hydrochloric acid. Based on qualitative analysis, four samples were subjected to cytotoxicity and anti-inflammatory tests.  Cytotoxic compounds may be present in four extracts of indigenous food plants that can induce cytotoxicity.  Of the four extracts, D. philippinensis showed the highest edema inhibition.

■Lecturer: Dr. Rodney T. Cajimat
De La Salle University, Philippines
■Title: Spatial Patterns of Epiphytic Lichens in a First Class Municipality: A Basis for an Index of
Atmospheric Purity in the Philippines
■Abstract: Lichens are sensitive epiphytes known for their medicinal and ecological importance. Lichens are also being investigated for their potential as bioindicators of environmental changes or disturbances, e.g., atmospheric impurities. This study utilized the Quantum Geographic Information System (QGIS) technology to develop contour maps from interpolated data points based on the patterns of lichen distribution, size and abundance, with respect to the temperature and atmospheric pressure of the areas. The survey areas were identified using the OpenLayer Plug-in and Assisted-Global Positioning System (A-GPS). Physical factors on altitude and pressure were identified using A-GPS and barometer. The abundance and size of lichens on different tree substrates were gathered using the quadrat segment method. With QGIS, data points were interpolated, data were statistically analyzed, and contour maps were developed. Findings of the study revealed that lichens were found in all of the surveyed areas in the municipality. Although relationship of lichen size and abundance with pressure and altitude showed no significance, large lichens can be seen in the western part of the municipality and abundant lichens can be observed in the northern areas. On the other hand, the relationship of lichen size and abundance were inversely proportional. Larger lichens appeared to be present in areas where lichen abundance was less; on the contrary, lichens were abundant in areas where lichens were observed to be smaller. As a preliminary survey, the generated contour maps can be used by future researchers to identify possible areas where physiologic characteristics of the lichens might have been potentially affected by environmental stress. And to investigate further the underlying causes of lichen differences in terms of their significant physiologic response to environmental stress like atmospheric pollutants, derivatives or impurities. The next study must involve intensive physico-chemical analysis of lichens and the area to which they are thriving to establish an index correlating lichen physiology and atmospheric impurities. 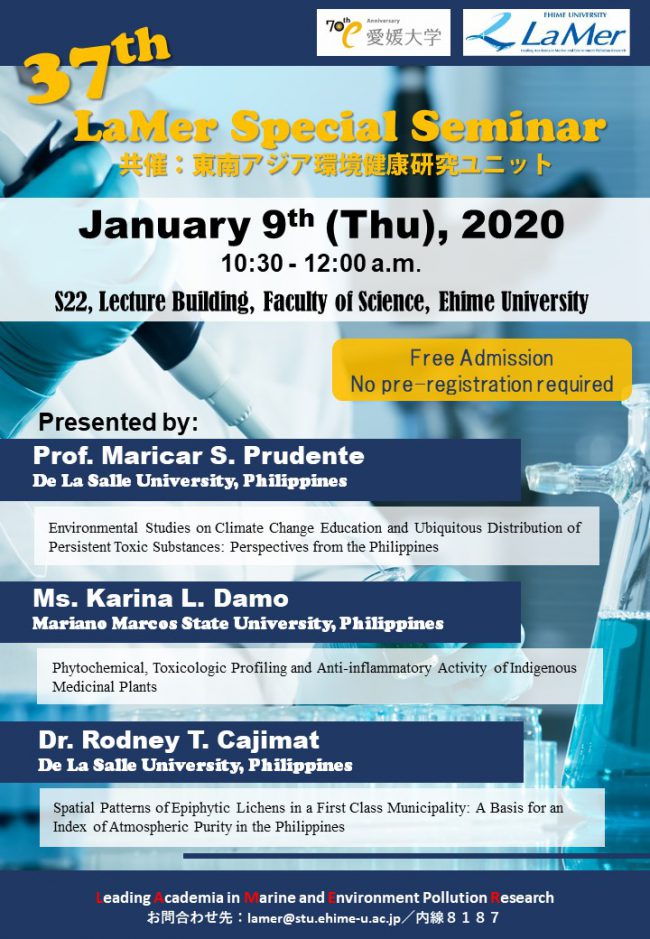